Recognized as one of the most ornate facilities in the country, the Majestic Theatre in San Antonio, Texas has long held a special place in the archives of Texas theatrical and architectural history.

Located in the heart of downtown San Antonio, the Majestic was designed and built in 1929 by John Eberson for Karl Hoblitzelle’s Interstate Theatres, and stood proudly for many years as the largest theatre in Texas and the second largest motion picture theatre in the country. It was intended to be the most modern and ornate building in South Texas – complete with new sound and projection equipment – and was the first theatre in the state to be totally air-conditioned.

The Majestic remains one of the finest atmospheric theatres ever built. Inspired by Spanish Mission, Baroque, and Mediterranean architectural traditions, theatre patrons are transported to a fantasy villa. Walls become towers with windows of colorful glass. A rare white peacock perches on a balcony railing as doves are caught in mid-flight. Grape vines creep along the walls and luscious foliage flourishes. The vaulted “sky” comes to life as stars twinkle while drifting clouds pass by overhead. Balconies, tile roofs, arches, and columns, railings, elaborate ornamentation, statues, and a bell tower all aid in the transformation of the theatre into a mystical village.

On December 31, 1974, changing entertainment habits forced the Majestic Theatre to close its doors “forever.” The next year, the theatre was listed on the National Register of Historical Places, and in 1976 was donated by the Hoblitzelle Interests to the newly formed Majestic Foundation. For the next decade, a wide variety of concerts, performing arts events, and touring Broadway productions continued to entertain South Texans from the Majestic stage.

Las Casas Foundation, a non-profit organization dedicated to the preservation and restoration
of historic buildings for cultural use, ensured that the Majestic would continue to flourish. Las
Casas raised $4.5 million to restore the 2,311 seat theatre. Sixty years of dust and dirt were
removed to reclaim the extensive, hand crafted, decorative plaster, statuary, and other ornate
carvings. Upholstery and carpeting were woven to recreate the original 1929 design. New
production sound systems and acoustical enhancements were installed. The Majestic reopened
in 1989 as the home of the San Antonio Symphony (1989-2014), as well as a venue for Broadway touring attractions, performing arts events and concerts of all types. In 1993, the Majestic Theatre was designated a National Historic Landmark.

In 1995, with the acquisition of the Little Brady Building, located at 208 E. Houston Street, a 3.5 million dollar expansion of the Majestic stage house was undertaken. This expansion was completed in the fall of 1996, giving the Majestic a new 40 foot-deep stage, modernized theatrical rigging, a state-of-the-art orchestra shell, expanded dressing room facilities, and enlarged storage space, allowing the Majestic Theatre to continue to meet the changing needs of symphonic and theatrical productions. This expansion has allowed the theatre to hold mega- musicals, including Miss Saigon, Show Boat, The Phantom of the Opera, and Lion King. 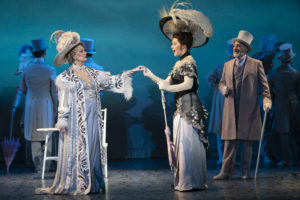