“Madama Butterfly” Will Move, Delight You 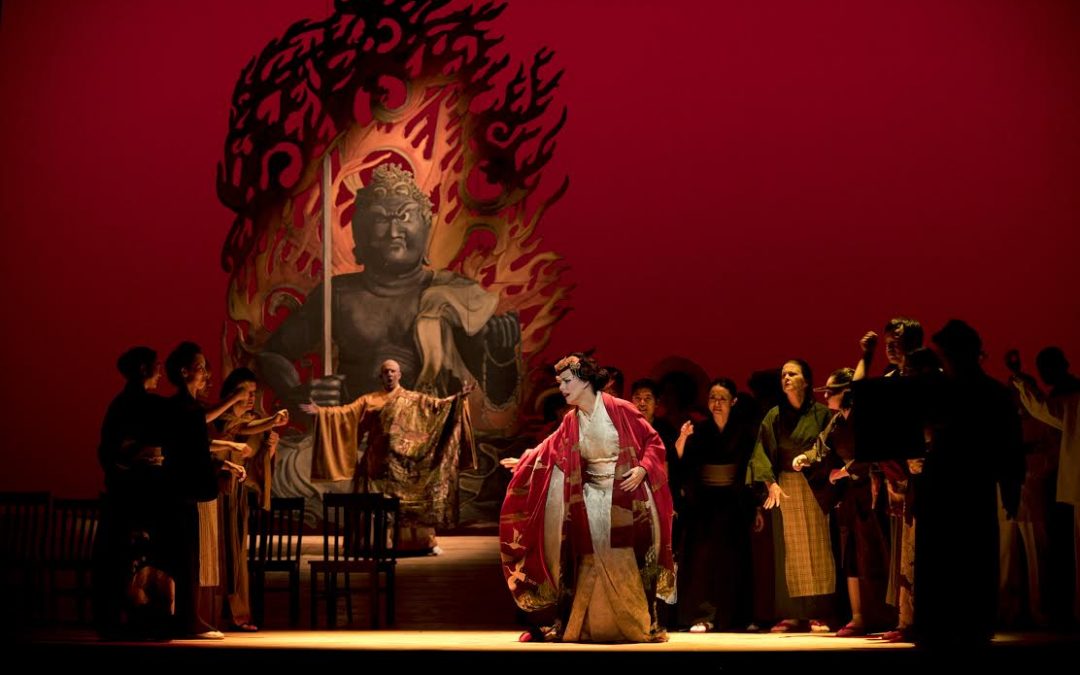 There’s a reason audiences have loved Puccini’s “Madama Butterfly” for well over a century. Its powerful combination of eloquent, melodious music and a realistic, heartbreaking story of betrayal and sacrifice, packs a strong aesthetic and emotional punch. Opera San Antonio (OSA) was wise to start its second season with this classic.

Kanyova is the perfect Butterfly, both looking the part and singing with a voice that wraps itself around each phrase and each emotion – clear, heartfelt, flawlessly moving through the demanding vocal range. Her post-wedding duet at the end of Act I with Diegel is beautiful and romantic, the one spot in the story that helps you understand her love for this selfish, insensitive man who sees her only as a temporary playmate. But she really rises to the occasion later on with Butterfly’s famous aria “Un bel di” in which she expresses her longing and hope that Pinkerton will return to her. He does return but with an American wife, setting the stage for Butterfly’s final heartbreak and her decision to commit suicide. Kanyova embodies a mother’s agony in voice and body as Butterfly sings her farewell to her little son.   There were tears in the audience Thursday night.
While everyone loves Butterfly, the role of Pinkerton, the caddish American Navy officer who sees the world as his oyster, is more difficult to pull off because the character is so unappealing. He is meant to represent the American attitude toward other cultures at that time, disrespectful, condescending and utterly self-centered and Diegal portrays him convincingly and has a great tenor voice.

The supporting singers, mezzo Kristen Choi, who plays Cio-Cio-San’s faithful maid, and baritone Luis Ledesma in the role of the sympathetic American consul are also right for their parts. And the little boy cast as Butterfly’s son (Jacob Aiden Kania} is plain adorable and a natural on stage.

But the performers are not the only strong feature of this production. Originally conceived and directed by Francesca Zambello, now the artistic director of the Glimmerglass Festival in upstate New York, this version of the iconic opera incorporates a contemporary narrative esthetic. The scenes with Butterfly anxiously waiting for Pinkerton’s ship to arrive have a striking visual simplicity and a fantastic sunset-sunrise lighting (by Alan Burrett) that heighten the impact of the drama. Ditto for earlier moments when Suzuki, the maid-helper-friend, and Cio-Cio-San throw flower petals all over the stage, with the boy joyfully joining them. The golden-rosy light, the shimmering petals and their gorgeous voices create a most memorable experience.

While these innovations work extremely well, some of the set changes introduced in Act I and repeated in the beginning of Act II seem a little forced and unnecessary. Both acts place the action in the American consular offices instead of in Pinkerton’s house, which causes some awkward plot displacements. The office setting, however, allows for inclusion of a large cast of both American and Japanese supporting characters who help define the time and place of the action.

Though we, reviewers, tend to focus on the stage proceedings, there would be no opera without an orchestra, and the orchestra in this case is the top-notch San Antonio Symphony under the baton of Sebastian Lang-Lessing. The opening night audience gave them all a prolonged standing ovation.
——————————————————
“Madama Butterfly” repeats Saturday, Oct. 3 at 7:30 p.m. Tickets at the Tobin Center’s box office.