“If the Mummy, Vampire or Zombie Don’t Get You, the Giant Crocodile Will.”

How’s that as an incentive to go see “Unhappy Campers,” the latest play penned and directed by playwright William M. Razavi at the Overtime Theater? 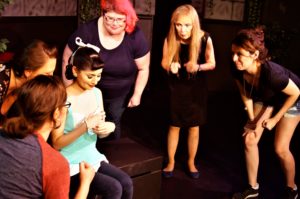 And there are killers on the loose as well, presumably human killers, though the press release does not specify. That’s the situation the title “unhappy campers” have to contend with. What’s more, they are all women!

Described as “the Halloween monster-flick comedy,” the show opened Friday, Oct. 26 and continues through Nov. 17.

The Overtime is known for original scripts and all sort of comedies, many of them written by Razavi who is the theater’s artistic director. His play “Making Up for Lost Time” was workshopped at the American Repertory Theater in Cambridge, Massachusetts, and was nominated for the Alamo Theater Arts Council Globe Award for original script. Another work, “The Sign of the Times” was published in “Trickster’s Way” in 2009 and performed during the Luminaria festival in 2010. He has directed multiple productions of his own work at the Overtime and other places.