“Rappaccini’s Daugther” Will Be Sung in Spanish 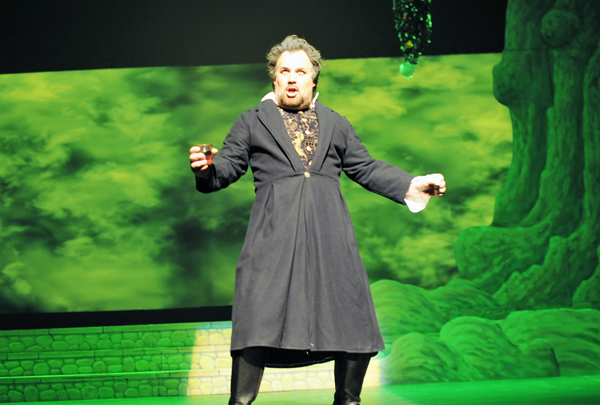 To close its fifth season, Alamo City Opera (ACO) has chosen to present “La Hija de Rappaccini” (Rappaccini’s Daughter”) by Mexican composer Daniel Catan, which is being promoted as the first contemporary opera sung in Spanish in San Antonio history. Performances will take place at the Palo Alto Performing Arts Center on the city’s South Side.

“It’s our gift to the Hispanic community that shows our commitment to our city’s rich cultural heritage. We are bringing opera to people who may not have seen opera before,” said ACO’s general director Mark Richter. ”People may be intimidated by opera but if they come to see it, they’ll think it’s the coolest thing in the world.”

Based on a story by Nathaniel Hawthorne, which was more recently turned into a play by Mexican Nobel Prize winner Octavio Paz, the opera is set in Renaissance Italy, in the city of Padua, where a certain Dr. Rappaccinni performs scientific experiments in his gorgeous but toxic garden. He has exposed his beautiful daughter Beatriz to the potent toxins throughout her life, which made her immune to them but also turned her into a toxic person herself.  Another scientist, Dr. Baglioni, disapproves of Rappaccinni’s work which he considers cruel and dangerous. Into this situation comes Giovanni, a young man who promptly falls in love with Beatriz when he observes her from the balcony of his rented room next door. Suffice to say, there’s no happy ending here. Scholars have debated for a long time the nuances of meaning in the story but there seems to be general agreement that the work explores the issue of pursuing knowledge at the expense of ethical responsibility.

Richter was seduced by the great story and inspired music. “When you have the combination of all these brilliant geniuses (Catan, Hawthorne, Paz), it was easy to choose this work for our season finale,” he said.

The production is directed by ACO’s frequent stage director Cynthia Stokes, with music direction by conductor Kristin Roach. Years after he wrote “Rappaccini’s Daughter,” Catan adapted his score for a chamber-size ensemble, thus making it easier for smaller companies to produce his most famous work. The singers will be supported by two pianists, a harpist and “lots of percussion.”  And these instruments are played by the musicians in all sorts of unconventional ways, noted Roach. But opera is ultimately about singing. Both Roach and Richter referred to the vocalists as being top-notch, “one of best teams we have ever had.”

Beatriz will be portrayed by soprano Sandra Lopez Neil; baritone Blas Canado Gonzalez is Rappaccini and tenor Nicholas Simpson sings the role of Giovanni. All have received accolades for their performances. San Antonio tenor Jacob Valadez and mezzo Nora Graham-Smith will appear as Baglioni and a neighbor,  respectively. Roach described the vocal parts as consisting of both grand-opera style arias and poignant narrative passages. There will be also three singers off stage giving voice to the flowers. All of them, “create the full gamut of sound,” said the music director.
——————————————————————————————————————————–