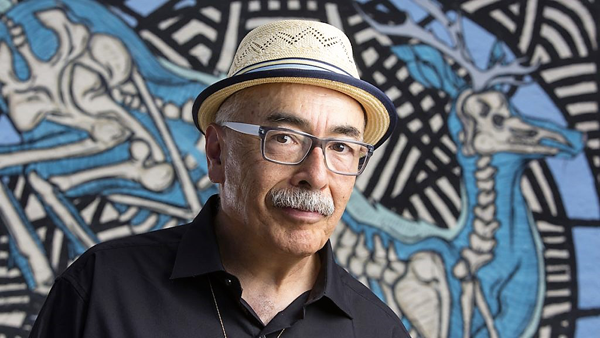 Every spring, Gemini Ink brings nationally known writers to San Antonio to take part in its Autograph Series events. In collaboration with ARTS San Antonio and the Guadalupe Cultural Arts Center, this year’s special guest is Juan Felipe Herrera, the current Poet Laureate of the United States, and the first Mexican-American to hold that title. Appointed twice in two consecutive years, he is the first active poet laureate to visit our city, though Philip Levine took part in the Autograph series soon after his laureate term expired.

“It’s a pretty big deal,” said Gemini Ink’s executive director Sheila Black, herself an accomplished poet. “I started reading his poetry about ten years ago. He seemed so avant-garde, expanding what poets can do, yet very much accessible and, as it turned out, popular. His poetry responds to real-life situations, opens up the bigger questions.” She expects Herrera will discuss some of the big questions of our time during his visit and the role of poetry in addressing them.

A California native and son of migrant workers, Herrera is a prolific writer who has penned some 30 books of poetry and prose, and received many literary awards, including the PEN/Beyond Margins Award and the National Book Critics Circle Award. Among his poetry collections are “Notes on the Assemblage,” “Senegal Taxi” and “Half of the World in Light: New and Selected Poems.” In reviewing “Notes,” which appeared in 2015, the New York Times reviewer, Eric McHenry said: “Herrera’s latest collection is a book full of outrages – bigotry, poverty, murder – but not a book that wants to burn things to the ground. The fire that appears again and again in Herrera’s poetry exists to illuminate, to make beautiful, to purify… the poems have power and energy to burn.” Herrera’s poems have also been praised for their almost song-like quality when delivered live on stage.

During his stay in the Alamo City, the prominent poet will give a free reading at the Guadalupe Theater at 7 p.m. May 4, followed by a Q&A session and book signing. The next day, May 5, he will be the guest of honor at the Gemini Ink’s luncheon/colloquium at 11:30 a.m. at the McNay Art Museum. In addition, Herrera will make a special stop at Jefferson High School though it was not part of the original plan. However, when asked if he could make time to meet with the Jefferson students, he promptly agreed.