“AN INFINITE ACHE” A LOOK AT LOVE AND MARRIAGE

Like everything else, love and marriage change over long periods of time, but they endure as fascinating subjects to explore in novels, drama, film, and in every other medium available to humankind.

To see a contemporary thespian version, which involves a Jewish man and an Asian woman, head to the San Pedro Playhouse where the Public Theater of San Antonio is presenting the local premiere of David Schulner play “An Infinite Ache,” directed by prominent San Antonio director Jim Mammarella. It will run until Jan. 20th in the downstairs Cellar Theater. 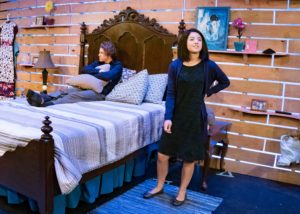 “It’s a unique, compelling play,” said Mammarella, who has had a long history with the companies occupying the San Pedro Playhouse since the days of the San Antonio Little Theater, the first occupant. And he is delighted that the Public’s artistic director George Green asked him to direct “Ache.” “This is the first time for me to work with the Public and it’s has been a wonderful experience working with them.”

“Infinite Ache” begins with a “supremely uninteresting first date” of two young people named Charles and Hope, and then proceeds to show you the couple’s entire married life in a rapid succession of scenes that include the trials and tribulations, as well as joys and second chances, most marriages go through. The action develops in and around the marital bed which stays center stage as Charles and Hope’s lives unfold.

“You have to have very intelligent, capable actors to move through a sequence of life changes in such a short time,” noted Mammarella. “They ‘age’ by adjusting their voices and their body language and overall physicality… It’s a blessing to work with two professionals whose entire life revolves around acting and theater.”

Both actors – Nich Witham and Stephanie Lim – are members of the Actor’s Equity Association who came to San Antonio specifically for this production. Set design is by Jeremy Whittington and costumes are designed by Sara Brookes. And there’s a credit for choreography, too – Courtnie Mercer, the Public’s resident choreographer – so there must be some dancing in the show.

The play is likely to resonate with audiences, said Mammarella, because the people who have had a chance to see it so far have often made comments such as, “It’s so true to life,” or “I have had similar conversations with my husband/wife.”

“People identify with these characters,” he said.